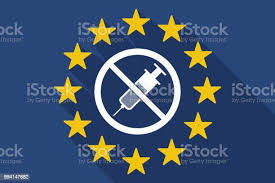 The EU's use of Twitter for diplomacy and the preposterous statement by Micron were both quite redolent of Trump. And, perhaps surprisingly, it was in stark contrast to the calm behaviour of the UK, in particular Boris Johnson. I'm not sure would have expected this but, having read Dominic Lawson's column last Sunday it's clear that the government has a strategy of being courteous to the EU, at least in public. Although Katya Alder reported on the BBC that the government had "berated" the EU (it hadn't), Johnson declined invitations from his backbenchers in the Commons to tell the EU "hands off our vaccine" and, according to Lawson's source, the order has gone out from the PM that we are not to compare our vaccine inoculation performance with that of the EU and certainly never to make a point of it. "The line we get from Downing Street is show, don't tell". All this despite the provocations of  comments such as the EU justice commissioner, who accused the UK of wanting to start a vaccines "war" and and the Belgian deputy PM saying the UK was "vaccinating people with vaccines that do not have the same standard as the ones we use". On the contrary, when the EU threw its wobbly, Johnson and Gove worked the phones with calls to the Irish PM and foreign minister, Gove spoke to Maros Sefcovik, the Slovak vice-president of the Commission (his opposite number on Brexit implementation in Northern Ireland) before Johnson phoned Von der Leyen and emphasised that, if it undermined contract law, the EU would ruin its credibility. He said the Pfizer vaccines "have to be allowed to leave the EU". According to the Sunday Times the same evening Von der Leyen had spoken to the Irish, called Johnson back with an assurance that the Pfizer vaccine supply to the UK would not be interrupted and tweeted that
"we agreed on the principle that there should not be restrictions on the export of vaccines by companies where they are fulfilling contractual responsibilities"
almost word for word what Johnson had said to her. Nevertheless there was embarrassment at the Commssion's inept performance in Brussels. An official involved in the Brexit negotiations on the EU side said if Von der Leyen had not changed course "I think I would have resigned".
All this led Dominic Lawson to conclude that, at the moment, the separation is too raw for the EU to forgive.  The UK has decided to be polite and patient and "wait for them to get over it".
After all that's the best way to deal with the situation when faced with psychogenic movement disorder: stay calm, maintain composure, be polite and helpful. And don't smirk.
* Wolfgang Munchau sees a parallel between the EU's mismanagement of financial union and now vaccines. See Overloading: the EU used to do a few things well, now it does a lot of things badly. Eurointelligence blog, 29 January 2021. https://www.eurointelligence.com/column/overloading. The entire item is worth reading but on this point he says:
"I see a parallel with how the EU ended up mismanaging the monetary union. The eurozone is the shared responsibility of several commissioners, the Ecofin, the eurogroup, the European stability mechanism, 19 governments and various quangos set up around them. It lacks the legal and institutional ingredients of an economic union: a finance minister, tax raising powers and the right to issue debt. Austerity, probably the gravest economic policy error of our time, is what happens when you leave 19 small-to-mid-sized countries on a rules-based fiscal auto-pilot."
** Some experts now say this traditional view was overly burdensome and not actually justified by case law in the UK (and also the US) and should be limited by what is reasonable. They say that "reasonable" efforts (or endeavours) implies taking one course of action, whereas "best" efforts requires all reasonable courses to be taken.  So a requirement to undertake "all reasonable efforts" is essentially the same as "best efforts". They don't consider the EU contract phrase "best reasonable efforts" though I would argue that falls short of "all reasonable efforts", you just have to assess what the best options for success are. See https://www.jonesday.com/en/insights/2007/07/best-efforts-and-endeavourscase-analysis-and-practical-guidance-under-us-and-uk-law#:~:text=An%20obligation%20to%20use%20reasonable,the%20reasonable%20courses%20he%20can.
*** This was in an interesting article "Attention turns to vaccine production following successful trials" in The Chemical Engineer, Issue 954/955 December 2020/January 2021. This article predicted that the bottleneck in supply would be in supply chains including packaging into vials, which is likely to become more so when the vaccines  are being made in quantities to export around the world. It also quoted a member of the IChemE's Covid-19 Response Team saying he was confident Pfizer, AZ and Moderna would meet their production targets. (He didn't say specifically which production targets, we are still very early in this game).
**** The Wockhardt plant has nothing to do with Germany. Apparently the British-Indian owner called the business this because it sounded like "work hard".
Dominic Lawson's column "Brexit is done. We don't need to bait Brussels" was in the Sunday Times on 31 Jan 2021.
Panicked calls, hasty tweets: how the vaccine crisis unfolded, Sunday Times 31 Jan 2021
You can view and download the redacted EU-Astrazeneca Advance Purchase Agreement at  https://ec.europa.eu/commission/presscorner/detail/en/ip_21_302
Posted by Phil Holden at 23:09