The pubs with no beer

"But there's-a nothing so lonesome, morbid or drearThan to stand in the bar of a pub with no beer"

It has been interesting watching the fairly minor differences in the approach to covid between the leaders in Whitehall, Holyrood and Cardiff blown out proportion. Especially when the fact that the Scots and Welsh ride on the coat tails of the English NHS on procurement and so many other issues that it is practically quite difficult for them to adopt significantly different policies. They can and do make a lot of noise though.

However in recent weeks small but significant differences have opened up and we have data on new cases under different regimes. Boris Johnson, having tried a regional, tiered approach lost his nerve and went for a four week national lockdown which started on 5 November. England has now reverted to a  tiered system, albeit with greater restrictions. Nicola Sturgeon has tweaked but stuck with her local tiered system - with even more tiers than the supposedly "confusing" English system Sturgeon hasn't hesitated to criticise. Meanwhile Mark Drakeford pre-empted the English lockdown and went for a 17 day "fire break" aka circuit breaker lockdown from 23 October to 9 November.

When Drakeford announced his fire break Johnson was under pressure from Labour to do something similar. One can imagine the conversation between Drakeford and Keir Starmer going something like:

KS: "Go for it Mark. When it works Johnson will look stupid and I'll look wise".

I never had dour Mark Drakeford down as a gambler. And I doubt he thought he was gambling with his fire break. However, I thought at the time it was a very risky punt. Why? Because a two week lockdown would probably depress the number of cases but not bring it right down. So the number of cases would resume climbing from a higher baseline - with a bit more than 6 weeks to go to Christmas. And the post firebreak regime was much less restrictive than it had been. As Drakeford promised it is Wales-wide, with no local variations. We can travel throughout Wales, for example, whereas through October up to the firebreak we had been restricted to our county.

Now I didn't think this required much of a crystal ball, but the graph for the number of recorded cases in Wales shows exactly the pattern I expected (remember the first peak would actually have looked much higher if as much testing had been done then): 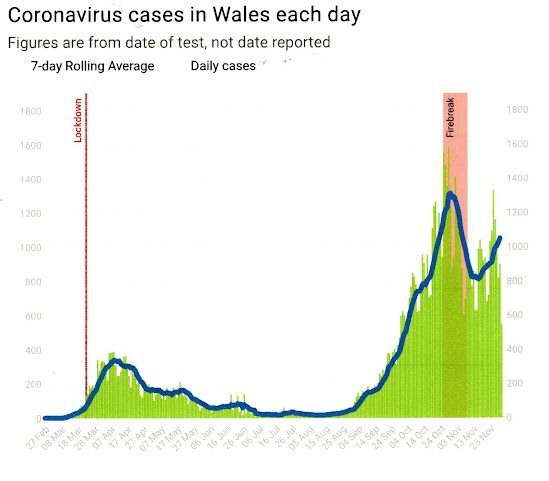 Extrapolate six weeks of increasing cases on this graph and Wales could have easily have had double the pre-firebreak number of new cases each day. And that's without allowing any extra uplift for the Christmas party season. Which is why gambler Drakeford had to fold his cards and announce tough additional restrictions this week. So from 6pm on Friday pubs can no longer serve alcoholic drinks. Yes, that's right, they can open but not sell alcoholic drinks, whereas in tier 2 in England pubs can serve drinks but only with a Scotch Egg, sorry substantial meal. The pressure is obviously getting to the First Minister if he doesn't understand the business model of a pub is to sell alcohol.

So now we have people complaining about the unfairnesses of the tiered system in England and the unfairnesses of the national system in Wales. We have Tory MPs criticising Johnson's tiered system and its impact on business without explaining exactly what they would do when the hospitals could not accept new patients, which seems to me would only be a matter of time if the restrictions were lighter. But we can, as I anticipated draw some conclusions.

Firstly, those calling for a circuit breaker lockdown a month ago were misguided. It doesn't even seem to get you back to the start point of the 2 week break. I'm very surprised that in the debate over the last few days Johnson and Hancock haven't pointed this out. With hindsight Captain Hindsight and his supporters were barking up the wrong tree.

Secondly, a tiered system can work, but the restrictions in the highest tier need to be tight enough - effectively a full lockdown other than schools being open. You get cries of "unfair" from areas with moderate infection rates brigaded with adjacent areas into tier 3. But if you break down the areas too finely you'll get cries of "confusing" and that it appears irrational to have pubs on opposite sides of a road operating under different restrictions. And as we see from Wales, a single national system produces the same cries of "unfair" from the lower infection areas (like mine, where we had zero new cases reported one day earlier this week).

Thirdly, while I think the governments of the four UK nations were right to agree what rules to adopt for Christmas we can expect some pretty high case numbers in January. The cavalry might be on the horizon in terms of vaccines, at least for this phase of the pandemic. Time will tell whether the vaccines bear down on covid in the same way as TB (i.e. nearly eliminate it), or like flu (seasonal variations coming round each winter) or something different from either. But for now we have a tricky few months to get through.

I think it is unfortunate that the firebreak didn't work better. It seems to me that, if you could plan for a fortnight's lockdown, say in every 6 weeks then businesses could plan for when they would be open, ordering stock etc. (It breaks my heart to think of the amount of beer ordered by pubs for the Christmas season that will go down the drain). But the fact is that it didn't work well enough to have much more than two weeks on for every two weeks off. So pretty useless then. Will Sir Keir Starmer admit that? After all he's quite fond of saying Johnson has got things wrong.

It also shows how vacuous the calls are for an "exit strategy". Predicting with any accuracy how much the virus will spread under different sets of rules is pie in the sky. The only strategy is to be ready to adjust the tactics as time moves forward. Controls have to be tightened or relaxed depending on the prevalence of the virus, even though some choose to criticise this as changes of direction, or "not knowing what they're doing". Those who beg for a definitive plan, an exit strategy, whatever, don't seem to recognise that it would always need to be able to adapt to prevailing circumstances between now and the vaccines paying off, presuming they do.

But, rather than end on the thought of the pubs with no beer (or beer they can't sell) I'll end on the hospitals with no patients. For some the answer to the risk of the hospitals overflowing is "use the Nightingales" (they are called Ysbyty Enfys which means Rainbow hospitals in Wales). Yet we now know what we suspected at the outset - you can build emergency hospitals remarkably quickly by repurposing other buildings but how can you staff them? So what purpose do they serve (other than the distraction of "don't just stand there, do something" back in April). Well, we've had our flu jab there so I've seen inside the Ysbyty Enfys Llandudno. On our previous visit to that part of Venue Cymru we saw the Stereophonics. And well organised it looked as a hospital. It certainly helped to space people out queueing for their jabs, which didn't just make us feel safer but enabled our GPs to maintain their self isolation which they have sustained since March. While some Nightingales have treated covid patients most have had few - and Llandudno none. Though that might be explained by the unsubstantiated rumour I've heard that the large skid-mounted oxygen tank which has been present on the site for many months can't be commissioned because of the proximity of a petrol station. If true I imagine the petrol station would be closed if the hospital really were needed. But without enough staff to operate it in parallel with the regular hospitals, what purpose would they serve? I can only assume it would be to hold dying patients before despatching them to emergency morgues if numbers of covid casualties overwhelmed the normal capacity. That would at least prevent the news channels showing frail, mainly elderly patients dying in tents or other makeshift facilities, as per the field hospitals deployed in northern Italy all those months ago. I feel sure that nightmare scenario is what has driven Johnson and Hancock's decision making, whether the vision offends them too much or they feel just it would be death politically.

I'm not saying they are wrong in that analysis, even though it didn't appear in the government's sketchy cost-benefit analysis of the covid restrictions. It's just unthinkable and, it seems, unsayable.

In 1957 A pub with no beer, performed by Slim Dusty, was the first Australian song to win a gold record. It was based on a poem by an Irish-Australian poet and has been covered by many artists in subsequent decades including Rolf Harris, the Dubliners and the Pogues.

The data for Wales covid cases is from the Public Health Wales dashboard but the graph came from Wales Online: https://www.walesonline.co.uk/news/health/coronavirus-cases-infections-deaths-wales-19372409