And if you know your history

It's the Merseyside derby tomorrow. This is the 236th edition of the derby according to Wikipedia, though according to a Liverpool fans site I found** it is the 239th. While it's tempting to say they obviously can't count, it may be that the difference is due to whether things like Liverpool FA Senior Cup matches count as well as League, FA Cup, Charity Shield etc. However I did note that the site says the next derby will be played at 6.30am Central Time, which confirms everything us Blues say about how local a club Liverpool really is. Whereas not many years ago Everton was identified as the premier league club for which the highest proportion of fans walk to the ground.

Be that as it may, it is one of football's most historic rivalries. One site I found*** lists the top 10 around the world. It started with the Merseyside derby as it is believed the first time a football match was called a "derby" in print was a reference to the 'local derby between Liverpool and Everton' in the Daily Express in October 1914, when the match had already been going for 20 years. The other nine so-called derbies were Milan, Rome, Moscow, Glasgow, north London, Lisbon, Istanbul, Manchester and Madrid.

All of these qualify as proper derby matches for me in that they are intense rivalries that are local. I squirm when I see the grudge Crystal Palace-Brighton match, which has only been a "thing" since 1976, called the "M23 derby". The clubs are 50 miles apart! If you have to go on the motorway, chum, it ain't a derby.

You may say that begs the question of what a "derby" match is. There is no definitive answer, but proximity and deep rivalry are the main criteria. Separated by a short walk of less than 0.6 miles across Stanley Park, Everton and Liverpool's grounds are closer together than any English league grounds apart from Nottingham Forest and Notts County. (At least until Everton relocate to their planned new stadium in the north Liverpool docklands). The Nottingham grounds are officially just under a quarter of a mile apart, but there's a river in the way and, unless you're the proverbial flying crow, they are more like half a mile apart across the Trent bridge. I've known many people who have expressed surprise when they see a photograph* of just how close the Everton and Liverpool grounds are to each other: 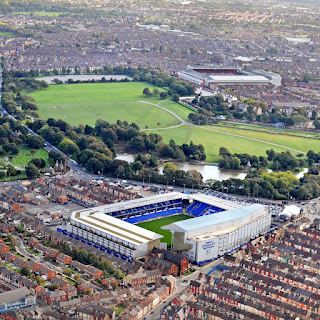 A common version of the "derby match" tale is that it comes from the annual Royal Shrovetide football match played between the Uppers and the Downers in Ashbourne played on Shrove Tuesday and Ash Wednesday (yes, it goes on overnight). This year's version of the medieval football (or "hugball") game was understandably a victim of the coronavirus restrictions. I think you can see why when you see this photo taken by a friend (must have been Graham or Suzanne) in 2016: 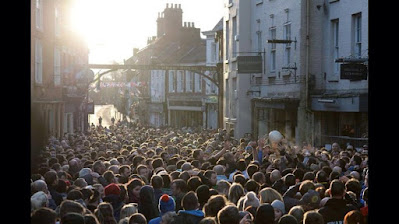 Trust me it gets a lot messier once the ball gets out into the fields (the goals are some 3 miles apart). When I worked in Derby some colleagues would book several days leave to play or watch (and drink). Shops are boarded up and the town goes into a Shrovetide lockdown for the event.

While some sources say Shrovetide dates back to the 12th Century, available records go back 'only' to 1667 (a fire in the Royal Shrovetide Commission offices in the 1890s destroyed the earliest records) and it is the survivor of many such sports. Shrovetide is a unique and very special event but the fact that it's played in Derbyshire seems to me a flimsy reason for why local sports rivalries are called "derbies".

A story I prefer is that the use of the word "derby" for a sporting match came from the Earl of Derby, who organised a rugby match between the two ends of his Knowsley estate, St Helens and Wigan. In time the phrase came to be used for all games between local rivals. The 19th Earl of Derby has been quoted as saying that his family gave the name only to the horse race (founded by the 12th earl in 1780) and the Saints v Woolly Backs rugby game. (I may just have betrayed my allegiance there. Our first two houses were in St Helens and the second one looked out over fields belonging to the earl's estate). I've seen mangled versions of this in print where the 19th earl, born in 1962 supposedly created the term "derby", when the rugby match in question would have occurred in the 19th century and presumably quite some time before the Rugby League was founded in 1895. The Wikipedia page on the St Helens - Wigan rugby rivalry proudly claims the derby phrase without saying when exactly it dates from.

However, the story I like the best**** says calling these games "derbies" comes from the Daily Express use of the phrase for Everton and Liverpool in 1914, the grounds being separated by Stanley Park, which the source says is owned by the Earl of Derby (maybe once, I thought it was owned by the city council). Which still begs the question: why did the Express journalist call it a "derby"? Presumably the phrase was in local use in south west Lancashire. So the strongest argument for "derbies" must be the Earl of Derby one.

And the first football match referred to as a "derby" is between the two teams from either side of Stanley Park, where Everton's predecessors and the source of top flight football on Merseyside, played - St Domingo FC named after a local Methodist chapel. After becoming Everton, the club subsequently split into the two modern day clubs.

Which leaves one final question. When will Everton, so long the bigger, older brother of Liverpool, win a derby match again? The last one was in 2010 and the last one at their original home, Anfield of course, was in 1999 when Kevin Campbell scored in a 1-0 victory.

The following graph of cumulative wins in derby league matches since they started in the 1890s shows the extent of Everton's relative decline since the 1990s (red and blue are self explanatory, the grey line is draws): 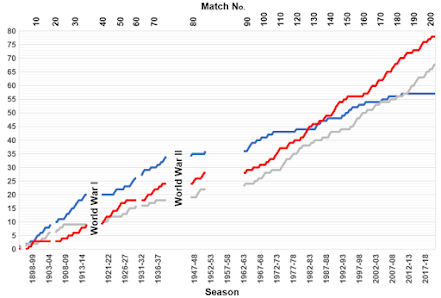 The odd thing about it is that Liverpool have hardly been a dominant overpowering force most of the time since 2000, until last season and the one before. But nevertheless Everton seem to go into these matches with an inferiority complex.

Go on, someone, make a name for yourself on Saturday. Add your name to the list of players who have scored famous winning goals in derby matches, including Alan Ball (when I was a schoolboy), through Andy King, Imre Varadi and Graeme Sharp, to Wayne Clark, Duncan Ferguson, Danny Cadamarteri, Andrei Kanchelskis, Kevin Campbell, Lee Carsley, Andy Johnson and Mikel Arteta. And become immortal.

Normally I would always settle for a goalless draw before kick off but it's about time Everton won.

PS most sources (including the definitive evertonfc.com) have decided it's the 238th derby

* From Wikipedia https://en.wikipedia.org/wiki/Merseyside_derby, but I need to attribute the author: By TurboGUY - Own work, CC BY-SA 4.0, https://commons.wikimedia.org/w/index.php?curid=91456900