My other half has joined the trend for international sanctions and trade embargoes. She announced (well, said to me over breakfast) that, with regret, she is implementing a boycott of Antigua and Barbuda.

What has this delightful small Caribbean country, one of our favourite locations in the world, done to merit sanctions being taken against it? Well, I had just told her that Antigua was one of 53 countries that voted for the pro-Chinese resolution in the United Nations Human Rights Council debate on Beijing's new national security law for Hong Kong. 27 countries backed the UK resolution criticising the new law.

I checked the list of countries published by Axios* because I was wondering whether the Chinese investment we saw on our first visit to Antigua in 2010 had bought influence. It has. The Chinese funded the Sir Vivian Richards cricket ground which was built for the 2007 World Cup. It replaced the historic Antigua Recreation Ground as the main cricket venue on the island. It was at the ARG where Brian Lara implausibly set the world record individual test score twice, with 375 in 1994 and 400 in 2004, both against England. It was also at the ARG that Sir Viv set a world record for the fewest deliveries to reach test century - 56 - in 1986. Yes, also against England. When the head groundsman saw us wandering round the outfield he gave us a guided tour, in return for a modest contribution to sponsoring his under 15s team's visit to England. Here I am pretending to be an umpire: 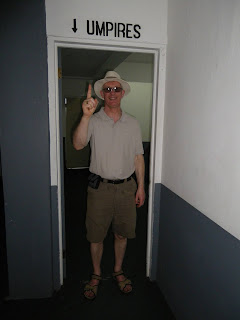 The new, modern stadium doesn't have the quirky feel of the ARG with its very varied separate stands but I suppose that is progress. 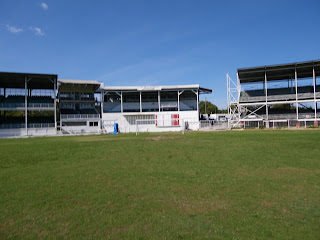 Yes, that is a football goal on the outfield. Cricket was still being played at the ARG in 2010, I'm not sure about now.

Antigua and Barbuda is a Commonwealth country but money talks against historical ties. On our visit in 2010 a guide pointed out the new Chinese-funded hospital, prominent on a hill above the capital Saint John's. And, tying ourselves in knots because of what counts as international aid, we failed to help them out after the devastating hurricane Irma in 2017 while China provided a US$16 million aid package, followed by a further $11 million in 2019 for affordable housing. I wrote at the time how daft it was that any hurricane aid we gave to our friends in the Caribbean didn't meet the aid criteria as those countries weren't officially poor enough** (they bloody well are now and we should help them anyway was the tone of my comment). The rules on what "counts" as international aid are set by the OECD's Development Assistance Committee. Countries with an average income per head of more than £9,400 do not qualify, even if their economy dips below that figure. Antigua and Barbuda is one of several countries which fell below that income level having previously exceeded it. To be fair we went ahead and gave £200M in hurricane relief assistance after Irma and Penny Mordaunt got the rules tweaked for the future after this particular aid nonsense.

Meanwhile we still give aid to China, whose economy is five times larger than ours. £71.6 million in 2018, a 29% increase on 2017. "The capitalists will sell us the rope with which we hang them" said Lenin. Ha, says Xi Jinping, they'll give me aid money to pay the bill. Somebody please get a grip of this, it is utterly crazy.

All the countries backing the UK resolution are regarded as "free", while the countries supporting the pro-China Cuban motion were those categorised as "not free" or "partly free" by Freedom House. Apart that is from three Caribbean countries: Dominica and Suriname as well as Antigua/Barbuda. All three and at least 40 of the other China backers have signed on to China's Belt and Road infrastructure project. Many of the African signatories are currently trying to renegotiate debt payments to China in the wake of the covid pandemic.

When we were in Antigua in 2010 Mrs H asked me why China was bunging the West Indian islands cash for cricket grounds and hospitals. I guessed it was influence - Antigua's vote at the UN counts as much as any other country's - rather than tweaking the US tail by having influence close to the American's back yard. After all, they don't need anyone other than Cuba to do that. Roll on ten years and Axios's Bethany Allen-Ebrahimian noted that "Beijing has effectively leveraged the UN Human Rights Council to endorse the very activities it was created to oppose."

As for Mrs H this new set of sanctions broadens those she already has in place against China. This is nothing to do with Hong Kong or China's arsey response to the Huawei decision: she has been boycotting Chinese restaurants and takeaways from before lockdown started in protest against the country's role in spreading coronavirus around the world.  I have to agree this step is logical: many British of folk Chinese origin travel back to China (or at least Hong Kong) and we don't know what they get up to with bats while they are there. So of course, in solidarity (or because I don't dare do otherwise), the only sweet and sour we are having these days is home made. Is that cultural appropriation, I wonder? And how will China respond to this latest British slight?

Anyway, back to watching the cricket: Mrs H hasn't (yet) barred Antiguans from appearing on our TV, though only spinner Rahkeem Cornwall in the 3rd test side is from the island, Alzarri Joseph being the other Antiguan.

* Countries that criticized or defended China's security law for Hong Kong at the UN. Axios, 3 July

Should we carry coals from Newcastle? (Northumberland actually)

This is the first in what might be an occasional series in which I ask a question in the manner of a psychometric test. Note your answer, read the blog and then check whether you would still give the same answer. Like a psychometric test there is no "right" answer but the answers can still be revealing.

Today's question is: should we allow any more coal mines to be built in the UK? You can choose between strongly disagree, disagree, no opinion, agree, strongly agree.

The government now faces a tricky planning decision. No, not the Desmond London docklands housing project which Jenrick got into difficulties over, but a proposed open cast coal mine in Northumberland. The Highthorn project was approved by the local council, having been backed by both Labour and Conservative elected officials, in 2015. Their decision was backed by the national planning inspector, who concluded that the benefits of the scheme would clearly outweigh the likely adverse impacts. Sajid Javid, then Housing  and Communities Secretary, rejected the report and blocked the development. The company behind the scheme, Banks Mining, went to the High Court where the judge quashed Javid's ruling, declaring that his reasons, based on greenhouse gas emissions, were 'significantly inadequate' and that the Secretary of State had provided  neither evidence for his conclusion or by what reasoning he had arrived at it. Javid did not comply with the judgement before being moved. His successor, James Brokenshire, also prevaricated. It is now on the desk of Robert Jenrick, who was in a great hurry to approve the notorious scheme in London's docklands. But on this matter Jenrick, whose officials promised an answer by April, has so far avoided taking a decision, blaming covid when that has not changed any of the evidence.

What covid has done, however, is accentuate the jobs issue, the prime minister having committed to 'build, build, build'. Banks Mining, part of a diverse energy group which also operates 14 wind farms, was established in 1976. It has operated 115 surface mines in the north of England and employs 250 people. But not for much longer if this scheme does not proceed as next month they are due to close their (and England's) last one.

Burning coal is a major contributor to greenhouse gas emissions and all sorts of other pollutants. The area where arguably the UK has made most progress on emissions is weaning itself off coal-fired power stations. So surely this decision is a "no brainer" as they say as coal mines are a bad thing? Well no, it isn't.

If we are going to "build, build, build" we will need steel, cement and bricks, the production of all of which currently requires coal. Soon there will be no coal-fired power stations left in the UK, a position I have looked forward to since the 1980s. But we still need five to six million tonnes of coal a year for the UK’s steel, cement and other industrial use. The high quality raw steel made in the UK cannot be made without coal and coke used in blast furnaces. In time that might change but not in the immediate future. Other UK coal customers include breweries, heritage railways, paper mills, sugar manufacturers, large commercial greenhouses and smokeless briquette manufacturers. Last year 86% of our coal came from overseas, over a third of it from Russia with some coming from Australia and the USA. Deciding not to extract coal ourselves, probably to higher environmental standards than in other countries does not reduce greenhouse gas emissions: transportation increases it.

But what about the UK's net zero carbon target? I defer to Dieter Helm, Oxford University's Professor of Energy Policy, just as I generally used to when we were both much younger and I worked in the same subject area in the 1980s:

"The story of the past 20 years is that ..... we have been de-industrialising and we've been swapping home production for imports, so even though it looks to the contrary [our policies] have been increasing global warming... There are no plans in the net zero carbon target which address that."

We can pretend to polish our green halo and outsource the coal production to other countries, reducing employment here, increasing global emissions and making ourselves more dependent on the rogue state that is Russia. Or we can apply logic and face down the bolshie Extinction Rebellion minority. The newly elected Tory MPs in the impoverished north east apparently describe this battle as "broke versus woke".

If Jenrick were to say "Yes" to the plans there will be a lot of noise because, in the modern world, social media has given the vociferous minority a platform to project their views while the silent majority remains as silent as ever. But carrying coals to Newcastle is an old saying for doing something pointless and it shouldn't be beyond the spin experts to explain just how pointless it is to bring coal in to the country instead of digging it up in Northumberland. Unless, of course, you think we shouldn't make - or buy from other countries - steel, cement and bricks at all and want to go straight back to a pre-industrial revolution way of life with equivalent living standards.

OK, back to the question: has your view changed?

My own answer, before I read the background would have been to disagree with any more coal mines being built here, but now I would strongly support it for our own domestic needs.

Politically this is difficult because of the "optics" from the green perspective, against which there is the red wall and jobs factors. The fact that Jenrick is already tarnished may give Johnson a kind of "free hit" if he leaves his beleaguered colleague to take the flak. However I fear the government will not "follow the science" (or at least the compelling logic) on this one but bottle it somehow.

Some data comes from 'Care about the planet? Rethink coal in the UK' at the Banks Mining website, https://www.banksgroup.co.uk/mining/need-for-coal/care-about-the-planet-rethink-coal-mined-in-the-uk/ which covers how the mining is done responsibly" and what happens to the site afterwards.

Some of this material came from Dominic Lawson's column What has 'builder' Boris got against the miners of Northumberland? in the Daily Mail on 6 July 2020.