He's not beneath us

While most football fans have been preoccupied with Euro 2020 (watch for the trivia question in future years about which year it was played), the subject of discussion amongst Everton fans has changed from who do you want as the next manager, to will they appoint Benitez, to when will they appoint anyone?

As the players don't return to training until 5 July (and even then not those on international duty, i.e. most of the squad)  and as the transfer market is in unofficial abeyance till the end of the Euros I've not been too bothered about Farhad Moshiri taking his time. It makes sense to interview candidates properly and get their take on how they would try to take the club forward. What I'm more concerned about is whether he knows what he wants, other than the biggest name he can get.

That looks like being Rafa Benitez. It has looked that way for so long one suspects other options have been sounded out but now it is reported that Benitez has signed a three year deal. Many sources claimed a social media campaign against Benitez by Everton fans opposed to the ex-Liverpool manager's appointment had something to do with the delay, the anointment having been proclaimed as imminent quite some time ago. But I suspect it might have been due to Benitez holding out for a longer deal than he was first offered, although I also wondered whether Moshiri had other candidates he preferred who decided against coming. I'm sure Moshiri was confident Benitez wasn't going anywhere else and would wait while he prevaricated.

My straw poll amongst Everton fans (yes, there are some other than me) has indicated no great antipathy to Benitez and many broadly pro. Though they also say that he would need to get off to a good start or things could turn ugly. I'm sure the majority of fans would get behind Benitez and the vocal minority would keep their powder dry for the first sign of under performance.

There was no greater affection among the fans for the early front runner, Nuno Espirito Santo. I was vaguely pro, though I accepted that there was some risk as Wolves started well under him but had a weak season last time round. Wolves were unlucky to lose their main striker to injury having sold another to Liverpool in the close season and they were weighed down by playing in the Europa League but even so, some cause for concern.

My biggest downer on Nuno isn't exactly logical - I didn't want to sound like the Pope every time I said the club manager's name in full. Together with the beard.

But all managerial appointments entail risk. I wondered about Graham Potter though apparently he has an expensive break clause in his contract with Brighton. Not half as much as the cost of an average premier league player, mind, so not enough to be a deterrent if the board thought he was the right man. My worry there was what if he's another Mike Walker, the manager Everton poached from Norwich in 1994 who nearly got us relegated when we had a team capable of winning the FA Cup the next season. Benitez is probably lowest risk from that point of view.

It's thought that Nuno and Benitez's ability to manage on a limited budget appeals to Moshiri who has gone through the usual cycle of a wealthy owner in believing that a fair bit of money can buy success, only to realise that you can spend a lot but stay where you are, or even decline and so start looking for value.

While for some Everton fans the Liverpool connection and Benitez's "small club" jibe about Everton back in 2007 is a no-no, I am relaxed about that. Everton had kept lots of men behind the ball in a boring goalless derby at Anfield and Benitez said this was what "small clubs" do. He clarified this some ten years ago saying he meant "small team" which you might feel didn't help much. However, excluding the back four and keeper the average height of Everton's team that day was 5ft 9ins, with the dimunitive Andrew Johnson, 5ft 7in, playing striker. Any team with Tim Cahill, Mikel Arteta and Leon Osman in midfield is undoubtedly not representing Brobdingnag. It's not enough for Michael Ball (the ex Everton and Rangers player, not the singer) who isn't happy that it Benitez took four years to issue this "clarification" but enough time's passed for me to overlook it.

Others say Benitez is past it and didn't do much in his last appointment, managing in China. But he was responsible there for setting up the whole club, including facilities and the academy, not just a team manager/head coach. He quit because repeated quarantine periods were getting to him, his family still living in his home on the Wirral that has been his base through all his jobs since he managed Liverpool. He is knowledgeable, assiduous in his research and passionate about the game. And he's won a Champions League.

As I've touted Benitez as Everton's next manager through the last three appointments (though hadn't expected Ancelotti to be a candidate) it would be strange for me to change my tune now. I like that he sets up a team match by match taking account of the opposition. He doesn't set out to play the same way whatever, which is a luxury only the very best teams in the world can indulge in (and even then I'm not sure). It's all very well if you're at Barcelona or Bayern but in most circumstances this would be like Etonians - people who only ever known the very best - running the country. Oh....

My concern is only that the football might be too pragmatic, as it was most of the time with Ancelotti. However, Benitez did send Liverpool teams out to try to get at the opposition, for example when they got stuck into Juventus early in their 2005 Champions League quarter final, scoring twice in the first 25 minutes of the first leg (the tie ended 2-1). He's a manager who believes in playing the situation, rather than a purist.

Which suits me, though I would like to see the team play in a more enterprising fashion. Too many English teams seem to play for possession rather than actually winning. Roy Keane noted that England played the ball forward too slowly in their Euro 2020 group games and needed to get the ball to their forwards more quickly. England's average pace of progress - less than one metre per second - was the slowest of all 24 teams. The quickest teams played at up to 2 m per second. OK that's the likes of Wales, Ukraine and the Czech Reupblic, but the last if these has played pretty well. The Germans and French were more like 1.4 m per second so England do look pedestrian, turning inside and back far too much. Everton gave been the same, not just under Ancellotti but Silva, Koeman and Martinez too. I'd like to see Everton play more like Bielsa's Leeds against most teams.

This may have actually been at the heart of Everton's prevarication. What is the football identity, the style of play, they are aiming for? For me, it's obvious. The Everton teams of 1970, 1985 and 1995 and David Moyes's team that recorded three top 5 premier league finishes could all defend but got at teams, pressed them and played at high tempo.

That Moyes team was the last to finish ahead of Liverpool, in 2005, when I called the then Liverpool manager Rafael Beneathus.

But he'll do for me. I didn't want Antonio Conte let alone Dave Allen (sorry, Manuel Pelligrini, in whom there was bizarrely rumoured to be interest from the Everton board in some reports).

And, while most fans are preoccupied with England's historic and just about deserved success against Germany, Everton fans are probably mostly relieved if the wait is finally nearly over, as the news feeds tell us Rafa's arrival is imminent. He would become only the second man in nearly 130 years to manage both Everton and Liverpool.

If so I wish good luck to the fat Spanish waiter, as Everton fans used to call him. 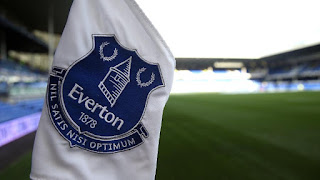