Check your privilege, Sirs and take my advice

A while back I wrote about Prince Philip's funeral. I didn't expect to be writing about the royal family again so soon, but I find I just have to give them some advice.

It seems whether Brits approve of Harry's, er, altered career profile depends on their age, the young being much more supportive than the old. I think it's entirely up to him what he does. I've always said if the royals don't want the job - and all it entails - they can quit. Just like any other job really, albeit one with some particular characteristics. But what puzzles me is why anyone thinks Harry and Meghan should be able to choose which parts of the job they want to do, while also using their royal status to leverage their earnings. Even more bizarrely they even seemed to think the British taxpayer should pay their security costs wherever they choose to live. From what little I saw of the Oprah Winfrey interview this point was never challenged.

As for his wife, let's not forget she was was pretty much universally popular at first. It was only much later - and given ammunition by the couple - that some newspapers started to snipe. As for me, I really don't care for Meghan calling Britain racist when many of us (certainly me and Mrs H) didn't know or care about her background. Though maybe it is racist to not even realise someone you know nothing about identifies as black. (We initially assumed she was media star orange).

However what I really don't like about Meghan is that she seems to have brought all the underlying unhappiness in Harry to the surface. The apparently happy go lucky, jack-the-lad, blokeish military man who did so much good coming up with the Invictus Games now seems absolutely haunted. Turning the bloke woke seems to me to have helped him lose rather than find himself.

As I said in the post on Philip's funeral, I am a reluctant monarchist. But one point that does come out of the recent unplanned reductions in the size of the royals first team squad, as it were, with Harry, Meghan and Andrew's unavailability, is the need to have a substitutes bench. As a result I'm no longer quite so bothered about the fringe royals, or "hangers on" as some see them.  Just let the family decide how much depth of cover they need, within the budget they are given.

After all Sophie, Countess of Wessex got off to a dodgy start but is now seen as one of the safest pairs of royal hands. This only happened after some initial issues caused essentially by her trying to make a go of her own PR agency by using her royal credentials (sounds familiar) and then falling for a fake sheikh newspaper sting. Once she and her husband decided to abandon their business interests and play at being full time royals the problems evaporated. There was a lesson here about how difficult it is to combine the roles - maybe impossible in some careers. Not so difficult in something like the military where you do what you're told and stick to the script. More of which later.

For what it's worth - I know not a lot - I always preferred Sophie to Diana - maybe I can judge character after all? In one of my more outspoken moments (I have some, you know...) I heard an audible gasp from a work colleague standing behind me who was clearly a little taken aback to overhear me refer to the late Princess of Wales as the "dead, adulterous, airhead bimbo of a mother" of Wills and Harry in a lively bit of office banter about the royal family around 15 years ago. I was actually intending to be sympathetic to the princes but it might not quite have come across that way.

I now feel for Harry given his obvious pain and discomfort, though arguably he has made it all flood back. Why he feels it's right to say he wants to avoid passing on pain to his son, while subjecting his father to similar pain and implicitly traducing his recently deceased grandfather I just can't fathom.

As Harry and Meghan now have to earn a crust and need to maintain their profile the ordure will presumably continue to stream (literally, on Spotify) from them indefinitely as they retell their "truth", in Winfrey's risible phrase, on and on until we all throw up.

Quite why Harry feels we need to know his latest outpouring - that he's going to take extended time out from his "work" while he bonds with his second child in the luxury of his American surroundings - I don't know. Does he seriously think he is providing a role model for ordinary dads? People who do not have the slightest chance of doing the same? Perhaps he should, as he is fond of woke phrases, check his privilege.

Unfortunately the brazen behaviour of the BBC back in the 1990s in conducting its whitewash cover up investigations into the background to Martin Bashir's Diana interview seems to have destabilised Harry's brother. Rod Liddle pointed out that, from his own personal experience at the BBC, it was no surprise that senior management decided to dump on the most dispensible and junior person involved, the blameless graphic designer who followed Bashir's instructions in making forgeries. When this came out they switched to blaming the next most junior, Bashir himself. It's never the fault of the people supposed to be controlling and monitoring them, is it? The only people they never blame are, of course, the BBC management. They obviously never heard the old saw* that all failures are essentially failures of management.

Why do I say destablised? In William's rant (sorry statement) after publication of the Dyson report he claimed that Bashir's deceit substantially influenced what his mother had said. He said the Panorama programme had "no legitimacy" and he called for it never to be aired again. Basically expunged from history.

And yet there is little doubt Diana said exactly what she wanted to say and was delighted with the interview. So as one commentator I read put it William is now trying to silence his dead mother and rewrite history. Which is just what she felt people were trying to do to her while she was alive.

So my advice to Harry applies equally to William. And to their father, who threatens to be a loose cannon monarch with his insistence on letting politicians and sometimes the rest of us know his views on more substantive matters than his relationship with his plants.

Indeed I would be delighted to take a well paid role to offer this advice every time any of them is thinking of speaking outside their remit and offering the public any of their opinions:

"Sir, with respect, remember the your place and the successful strategy followed by the Queen. And shut the f*** up".

"Oh and if you don't like the deal you can quit any time you like. But remember quit means quit, not cherry pick the bits you like."

"You're welcome, my pleasure, sir. The invoice will be in the post, sir." 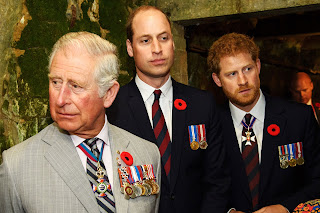 * apparently "old saw" is tautological, as a saw is an old saying. Sorry.