What a way to run a railway (updated)

Trains in Wales are now operated by Trafnidiaeth Cymru (Transport for Wales) controlled by the Welsh government. The previous operator, Arriva Trains, had become unpopular and decided not to even bid for the new franchise. It's not really a re-nationalisation as a private company, KeolisAmey, run the trains even though they don't have their name on them. It's early days but they haven't been happy so far, with a big increase in cancellations and delays.

In south Wales a commuter service from Chepstow and Caldicot to Newport and Cardiff has been cancelled 16 times in 20 weekdays. In north Wales there has been no service all day at Blenau Ffestiniog, Llanrwst and Betws-y-Coed on 7 of 20 weekdays.

To be fair TfW only took over in October and they have 36 of their 127 trains "being repaired", in some cases due to damage from Storm Callum. Having nearly 30% of your trains unavailable is remarkable. Yes, there was storm damage - I've seen photos of trains up to their ankles in water as it were. Trains are actually pretty reliable. One London commuter train company I had knowledge of ten years ago had around 38 units, one of which was in major overhaul at any one time. They could only afford to have one other unit unavailable to meet their peak hour timetables. So they needed 95% availability from their rolling stock to stand a chance of success.

It's been very noticeable that the trains are being very rapidly repainted and rebranded. Here it is being done (BBC photo): 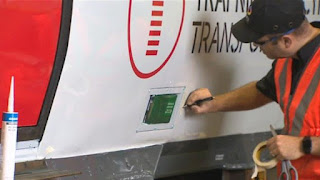 I may not be alone in wondering how many of the trains being "repaired" are actually being repainted rather than that work being rescheduled given the other problems. If that's the case this really is a bad start for TfW. They might have committed to contracts to have the trains repainted but, in that case, they should have had a break clause to defer work if they needed the trains to be operating because of other problems. I may be an old sceptic but either way it's not an encouraging start.

And passengers aren't  faced with branding on the trains of a voracious private company only interested in ripping off the public. So that's alright then I suppose?
Posted by Phil Holden at 23:16