We will remember them - but how? 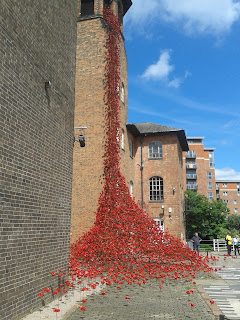 This is the Weeping Window display by Paul Cummins and Tom Piper, they of the poppies at the Tower, when they took their ceramic poppies on tour for 14-18 NOW, the UK's arts programme for the first world war centenary. This display was at The Silk Mill in Derby, a building that hosted a corn mill and medical supplies business during WWI, back in June and July.

A super and thought provoking large scale work of art.

I have worn a poppy in early November since I was a child. If anything I've got a bit less keen on actually wearing one, though I always make a donation, because of the poppy police. It seems you can't appear on tv without one and I always think they start wearing them much too early on in October. Poppy wearing seems to have become competitive, which doesn't feel right to me.

And talking of competitive, Premier League footballers now have them embroidered on their shirts. If they don't all kinds of media hell breaks over their heads. It wasn't like this until just a few years ago. When I coached my son's boys football team back in the 90s at my instigation and by agreement with the coach of our opponents we held a minute's silence before the match nearest to Remembrance Sunday and the boys all thought it was great, both teams standing around the centre-circle just like their favourite clubs on Match of the Day. It was just about the only time I got them all to stay quiet! But I don't agree with footballers having poppies on their jerseys. Even more so now that the home nations have won their argument with FIFA so our international teams do it as well, including last night's England v Germany match where the players of both teams had poppies on armbands. FIFA have backtracked from their earlier view that the poppy was a "political" symbol.

I'm with Martin Samuel of the Daily Mail on this. He says that it's only "half right" to say the poppy is not political propaganda because it's impossible to separate acts of remembrance by nation or race. Iran was fined by FIFA a year ago because fans at a match with South Korea were asked to mark Tasu'a by wearing black and replacing football chants with holy songs. Tasu'a is the day before Ashura, which is one of the most significant events in the Shi'a Muslim calendar. Ashura translates as "day of remembrance". So we get our poppies but surely Iran will be able to mark Ashura and Samuel wonders whether Japan will want to acknowledge Hiroshima's A-bomb day if they play on or around the 6th of August. It seems to me only a matter of time before we find our national football team is compromised by having to join in an act of remembrance for fallen which might include people we thought of as terrorists.

To be clear, I don't think our poppies are political but others might. And we might think their equivalents are either political or inappropriate. FIFA should have insisted on keeping this box firmly closed.

One of my old bosses, who served with distinction in more recent times before his career in business, had a different take on this. He never wore a poppy and used to sniff at me wearing one. He said it discouraged the government from taking proper care of our former soldiers and their families when they needed it. I didn't agree, but I could see his point. There are different ways of remembering, but that should be the bottom line.
Posted by Phil Holden at 08:10