By St George - a world first I wasn't aware of

Liverpool is a great and notable city for many reasons (give over, I'm talking culture and heritage here, cut out the hubcap jokes please!) There is so much history that I don't know and I learned one more snippet earlier in the year.

I was at St George's Hall in Liverpool a few months ago for a sad purpose - the registrar of hatches, matches and despatches for the Liverpool area is there. My only previous visit was for an Emerson, Lake and Palmer gig in about 1971. (See Best Musicians I've Seen - 2, 16 October).  I already knew that St George's Hall is regarded as one of Europe's most notable neo-classical buildings.  There are many great public buildings in Liverpool: it is a UNESCO world heritage site which doesn't just cover the waterfront, with the famous three graces, but "a great number of significant commercial, civic and public buildings, including St George’s Plateau"*.

When I saw ELP, thinking "this is a bit of an odd place for a gig", I didn't know that St George's Hall was originally intended as a concert venue, funded by public subscription.

But I also didn't know that St George's Hall was the world's first air conditioned building. There were earlier systems intended for air conditioning dating back to ancient times. And invention of the world's first modern air conditioning system is claimed by Willis Haviland Carrier, who designed a system for a printing works in 1902, but then the Americans try to claim lots of things the Brits invented first. Equally it wouldn't be the only time we invented something only for others to work out how to exploit it commercially.

Anyway, here is the system, designed by David Boswell Reid and commissioned in 1851: 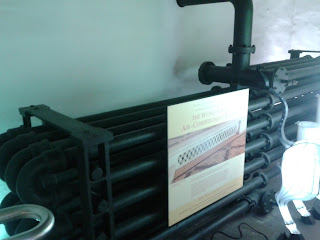 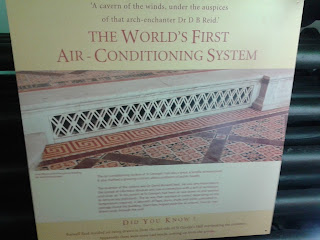 There is much more detail in the second reference below on the aircon system and the background to 25 year old Harvey Lonsdale Elmes winning the prize for the best design of the hall in 1839 as well as the inspirations behind the superb design. There was a subsequent competition for design of law courts to be built alongside St George's Hall. Elmes won that competition as well. Both competitions were judged "blind" and it is thought that Elmes's knowledge of the Hall design allowed him to make the designs complementary. He was appointed architect and asked to design a third building to house magistrates courts and a bridewell. Subsequently, Elmes's suggestion that two of the buildings be combined was accepted. Elmes had in mind that this would create "a public edifice that was larger than in any other borough in the land" - remarkable given that this was his first commission. The Law Courts Committee then took over the whole project in order to get it implemented and the money the public had subscribed for the concert hall was refunded. Elmes was asked to include a "concert room" to "contain 1200 persons" and it was presumably in that room that I saw ELP.

Despite the claims of Carrier, there is a blue plaque presented by the Chartered Institution of Building Services Engineers in St George's Hall celebrating it as the world's first air conditioned building. A royal charter is good enough for me: another first for Liverpool and England.