One Of Those Days In England (and Wales)


More beautiful early spring days yesterday and today with the blackthorn and gorse in bloom. I love seeing the blackthorn as it's confirmation of spring's arrival. Blackthorn is easy to recognise, especially when 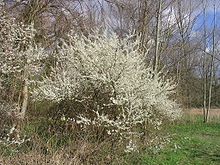 you've had a hedge of it on both sides of your garden fence and would prefer to just have on the outside. Digging up a hedge is hard work and blackthorn has very long, sharp spines. It's easy to distinguish from hawthorn: the bloom comes a few weeks earlier; it's creamier and much less profuse than the far more impressive hawthorn blossom; the leaves come after the blossom whereas it's the other way round for hawthorn; and the fruit are black sloes with a blueish bloom rather than red. All in all it looks much stragglier, with less foliage and less impressive blossom and fruit than hawthorn but, once I established that you can control it, I developed a fondness for it because of its early flowering period. Along with the snowdrops and then daffodils it represents the prelude to nature's annual symphony. Driving around the countryside on a glorious day at this time of year always reminds me of the Roy Harper lyric where he sings of "One of those days in England with a sword in every pond, and birds in every garden in the land" and of "buying rides on Mother Nature's funny belly dance".

Well, the weather forecaster promises us a messy ride of sun and showers tomorrow, some thundery in places and the snow we can see on the mountains may get topped up. Quite a belly dance.

Lyrics from Roy Harper's One of Those Days in England and One of Those Days in England, Parts 2-10. Take a listen - the first track is available in studio and live versions on youtube but the real prize, though you'll need nearly 20 minutes for it, is the second track, one of his epics, from the album Bullinamingvase,  1977 or the 2CD compilation album Counter Culture.