I thought all good keepers did this

My last column noted that Gylfi Sigurdsson and James Rodriguez shouldn't really be on the pitch for Everton at the same time. They didn't both start the match against Crystal Palace on Monday: James did and Sigurdsson was soon in action as Andre Gomes was injured after half an hour. Everton made more than enough chances to win comfortably in the 1-1 draw. But while he was on Sigurdsson had one of those games where he just didn't turn up. In contrast, James gave a very James Rodriguez performance. I didn't notice a single sprint* and he has a very low pain threshold when bumped by an opponent, so spends a fair amount of time on the ground looking wronged if not assaulted. But he protects the ball well, as always there were some gorgeously struck passes and his finish for Everton's goal was excellent: well struck by his weaker foot and precisely placed. Not an easy finish by any standards. As usual James didn't last the full match but his substitution after 79 minutes, as Carlo Ancelotti went defensive and tried in vain to protect Everton's slender lead, came around ten minutes later than normal.

The comparison between James and Sigurdsson didn't really back up Alyson Rudd's case that Gylfi should be "in charge" with James left out. (see Aly's hot on the Iceman but he blows hot and cold, 5 April). It may be that Sigurdsson feels inhibited or has a touch of imposter syndrome when he's alongside a golden boot winner.

But I've enjoyed many more of Alyson Rudd's columns than just her Valentine to Gylfi  One of her more recent columns gave her reflections on attending matches under covid rules. She cycles to many London matches and the stories about which clubs help store her bike and which ones have provided biscuits to the journos in the covid era were interesting but I particularly liked her account of being in the stadium with no fans present. I prefer listening on TV with no artificial stadium noise - because it's well, er artificial - but it hasn't been as easy to hear what the players are shouting as I expected. As well as being able to hear the players shouting guidance to each other there is always the entertainment of them bad mouthing each other.  Mrs H always thought it was good for me to get this out of my system playing on a Saturday without her around.  The broadcasters still make daft apologies for "offensive" language, most of which you don't actually hear and even if you do much of it is mere vernacular. But Alyson says there isn't actually much swearing - and then it's usually players swearing at themselves for making a mistake, which she finds rather endearing. And is actually how I remember football matches I played in. She also says referees are hardly ever subject to much abuse (they shouldn't allow any of course).

She notes that some managers are much more voluble than others. We know about Klopp but it's  Hassenhuttl who is permanently shouting at his players. When asked about it one of them said "he's just the same in training". They probably blot it out most of the time.

And some goalies talk much more than others. Kasper Schmeichel is the most voluble, always shouting instructions and not shy of criticising the players in front of him. When his defenders make a mistake he lets them know about it. The thing is I thought all good goalies did this. It used to be on the job description! I wonder if it has been diluted because of the number of overseas players in the Premier League, due to language or culture. Or, given that Schmeichel isn't one of the younger players, maybe giving a constant stream of negative feedback to your team mates is not what people do in these snowflake days. 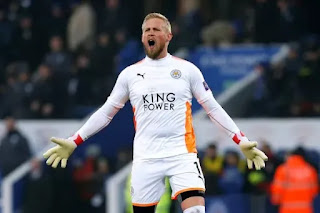 A simple fact about football is that it's the centre backs who are both in the best position to see most of what's going on and also have the most time to organise a team. The goalkeeper is too far from the action most of the time. But when play gets near the penalty area that switches to the keeper, enabling the centre back to concentrate on his job. I was taught that, ideally, the keeper controls the box and in that zone his is the voice you listen to. Playing in front of a quiet keeper is very disconcerting; you feel you never know what they are going to do.

The nightmare of course is when, at centre back, you go to play the ball and find the keeper, without warning, has rushed out of his goal to go for the same ball. It's about as much fun as finding two batsmen in the same crease at cricket. We saw a classic example of such a communication failure when another Alisson - Liverpool's Becker - bundled into Ozan Kabak in the game at Leicester in February leaving Jamie Vardy a free run on an empty net.

I'm all for the "sweeper keeper" but just tell your defender you're coming so he can concentrate on blocking off the forwards to leave the keeper free to play the ball. This is the sort of sneaky defensive play, just short of a blatant foul, which gets me shouting at the TV these days but which I specialised in when I played.

So I'd rather have a constant stream of Kasper Schmeichel invective instructing me where to play it, telling me off or asking me, in the manner of my old mate Herbie, who was never short of a word or three, "what the **** did you do that for?" Which happened quite often in the hundred or so matches we played together, about half my time as a centre back. When Herbie came for the ball you knew about it in good time. Which was just as well; he's a big fella and you didn't want the football equivalent of a charging rhino clattering into you. Much better than hearing the odd hesitant call or an unsettling silence and never being sure what's happening behind you.

* Remarkably James had as many goals and assists as sprints in his first few games for Everton. You might say that isn't hard when his number of sprints is essentially zero, but that wouldn't be quite fair. He sprinted all of seven times in his first four matches, in which he scored three and had four assists. Carlo Ancelotti said "During the first four games, do you know how many times he sprinted? Seven! He’s got more assists and goals than he did sprints." Which may show either Carlo or his data analyst can't count, or maybe goal.com can't. See James Rodriguez earns Ronaldo comparison after opening Everton spell with more goals and assists than sprints, goal.com, 3 November 2020. https://www.goal.com/en-gb/news/james-rodriguez-ronaldo-comparison-everton-goals-assists/mcadxqfosaz117xub6b65gl0i