Should we have more or fewer billionaires?

This is the second post* in what might be an occasional series in which I ask a question in the manner of an amateur psychometric test intended to give insight into people's preferences and prejudices. Note your answer, read the blog and then check whether you would still give the same answer. Like a psychometric test there is no "right" answer but the answers can still be revealing.
Today's question is: would the country be better if we had more or fewer billionaires? As it's in psychometric style you're allowed to pick from 5 answers: a lot more, some more, the same, fewer or a lot fewer. There is of course, no "right" answer but think of your response and then read on.

This particular question was prompted by reading about one famous billionaire, James Dyson, the UK's richest person according to this year's Sunday Times Rich List** and a young Brit who seems destined to follow a similar path.

Dyson has already gone from hero to zero. He commercialised bagless vacuum cleaners using cyclones -a well known concept to process engineers for decades but usually quite large devices. Indeed, Mrs H and I always found the early models far too heavy and cumbersome.Whereas the latest battery powered versions are just fantastic, a design triumph. (Yes, I do know how to use it....).  Further success followed with the air blade hand dryer which became so familiar when we used to travel and call at motorway services, if you can remember that far back. And he knows how to turn a profit: £1.1bn on £4.4bn of sales in 2018 is quite a margin for electrical appliances. The zero part started for some with his support for Brexit and he became a pantomime villain when he announced in 2019 that his company HQ would move to Singapore. Dyson says the move was not to optimise tax: the company expects to pay more tax as a group not less. And it has increased head count in the UK since the announcement - they have 5,000 people working on product development in Europe and North America. Dyson says that, as he sees the major future growth coming in Asia "if you are designing things for people in Asia you should be in Asia. You've got to live it and breathe it and think like Asians. It would be arrogant to think we can imagine products for that market sitting here in Wiltshire".

Like most entrepreneurs Dyson has had failures as well as successes. For example, there was a contra-rotating washing machine which had two drums rotating in opposite directions which didn't succeed. And more recently he set out to develop the world's best electric powered car but pulled the plug on the project after spending (I nearly said blowing but we'll come back to that) half a billion quid on the project. But if you presume that the project failed technically, you would be wrong.

The reason was purely commercial. Dyson designed a stylish 7 seater SUV with a windscreen raked more steeply than on a Ferrari. Huge though, weighing 2.6 tons even though the body is aluminium. Huge enough to accommodate a battery pack that would carry it over 600 miles on a single charge and with plenty of innovative features. The prototype looked superb. But Dyson decided he could not bring the car to market as it would have had to be priced above £150k. Whether or not that is good value the simple fact is it is a lot higher than the electric models sold by BMW, Mercedes, Audi and Jaguar  Land Rover who all subsidise costs through sales of traditional petrol and diesel cars. So Dyson reluctantly pulled out after investing £500M of his own money. Yes that's a lot but Tesla has burned through $19 billion of investors' cash without making a profit yet. And the work Dyson has done on optimising battery electronics and other aspects may yet be of value.

What about Dyson's personal circumstances? He is domiciled in the UK. He paid £103 million in personal tax in 2018, the fourth highest according to the Sunday Times Tax List (yes, they have one of those as well). That's enough to cover the employment costs of about 2,500 NHS nurses for a year. So Dyson's company makes a lot of profit, but they invest a lot and his company and he personally pay loads of tax. He owns loads of land - more than the Queen - but that means he pays to maintain it. Overall Dyson would seem an example of a billionaire who is a major asset to the country.

What about this next guy? 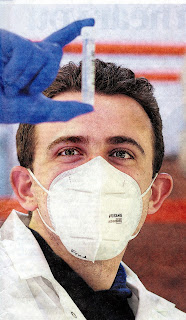 His name is Fred Turner and he's not a billionaire - yet, anyway, but I wouldn't bet against it happening. The 25 year old Yorkshireman is on his third or fourth business idea already. He first came to prominence aged 15 when he began building a polymerase chain reaction genetic testing machine in his parent's cellar. It subsequently won him the UK Young Engineer of the year award.  A farmer contacted Turner and persuaded him to test his cows to gather data for breeding, feeding and health management of his herd. Turner set up a company to provide genomics data to farmers which he ran while studying at Oxford. Then, aged 19, he dropped out of Oxford and moved to California where he was accepted into the well known Y Combinator start up accelerator which invests in launching businesses. But the farming idea didn't work - there weren't enough farmers interested in using the technology. So Turner pivoted to an idea based on helping doctors to prescribe the right drugs to patients with sexually transmitted diseases taking account of antibiotic resistance. That also failed to take off: Turner wound it up and launched a company called Curative, the target being testing for sepsis, a big market as 1.7 million people are affected each year in the USA. And then the Covid-19 pandemic appeared.
Turner reckoned the normal supply chain for testing could flex by perhaps 20% when an increase of 10 to 100 times was needed. Turner saw no point in designing a new test which would have to compete with other companies for scarce supplies. So Curative designed a do-it-yourself test which didn't rely on nasal swabs, for which there would be competition for supplies and which also doesn't require supervision by a health professional wearing PPE. You cough three times, swab the inside of your mouth, drop the sample into a tube and seal it in a bag. The test soon received emergency authorisation by the US FDA. It has proven to be as accurate as the more invasive approach, which I suspect is more reliable provided the swab is taken properly - a significant proviso. I know which sample I would rather provide.
Turner's test was being used within days on government officials, fire and police officers in southern California. By May his  company was making over 100,000 tests a day and won contracts with the US Air Force, the city of Chicago and the state of Delaware. By the end of July it had won a $42 million contract to supply a quarter of a million tests to the US Department of Defense. As of 9 September Curative claimed to be carrying out 10% of all the USA's coronavirus tests.
In the early stages the test was offered to the UK's Department of Health and Social Care. I expect you can guess what happened. Turner was told "random offers" weren't being accepted and to go through the official process. Curative supplied all its information, including its US authorisation and its capacity, only to receive an email saying "we're not interested. We are no longer accepting testing proposals". And that was the last they heard.
People like Dyson and Turner have an insatiable will to achieve. They have ideas and the vision and drive to turn them into reality. When one idea doesn't work they react quickly and pivot to another, many times if necessary. They go where they can get their ideas implemented.

For me it's a no brainer. I'd rather have a lot more billionaires, especially ones like Dyson who create wealth and employment and pay their taxes. I accept the country might be less equal, but Soviet-style equality of misery (apart from the apparatchiks of course) has never appealed to me. And we need to do more to keep people like Fred Turner in the UK, so there will be more like Dyson in the future. Otherwise we'll all be poorer.

* The first punk psychometric was Should we carry coals from Newcastle? (Northumberland actually) on 7 July.  The question posed was: should we allow any more coal mines to be built in the UK?  Like many my knee jerk reaction would be to strongly disagree but, after reading the facts, I flipped to srongly agree. Meanwhile the government still sits on the relevant planning application which I have predicted they will "bottle".
** Rich List 2020 was in the Sunday Times magazine 17 May 2020.
*** Turner's story was told in Oxford dropout's winning test for Covid-19, Sunday Times 17 May
Posted by Phil Holden at 23:22