Take the H out of HS2 now

Boris Johnson has inevitably called for a review of the escalating cost and ever extending timescale of the HS2 rail project. After all, it's been clear for some time that the project budget is completely blown and those in control are in denial, and/or covering things up. And also that the project is completely dysfunctional, with horror stories about egregious behaviour towards displaced landowners. It seems clear that many are not being paid adequate market value compensation for their assets, but I was even more horrified to learn that they don't actually get any money for quite some time after they have to vacate.I thought appropriation of assets without timely and fair compensation was something that only happened in authoritarian countries, at least until or unless Corbyn and McDonnell get in.

There is a strong case for cutting our losses at the already substantial sum of £7bn already spent and allocating the resources elsewhere. But we do need to improve our creaking infrastructure, economically it makes sense to spend on infrastructure while interest rates are low and there just aren't other "shovel ready" projects to start. And won't replacement projects just overrun (or never deliver) as well?

In a country where we can't seem to build any major project to time and cost any more it would be easy to despair. But there may be a way to salvage something useful from the mess.

The problems for HS2 started, well, at the start. I'm fairly sure the costs estimate was always ambitious, probably because the project would never have been approved at the numbers now being spoken of. But major projects often overrun and it doesn't stop them being seen later as a success, for example, the Channel Tunnel. Though of course in that case it was private shareholders who lost their shirts, just as they did in the case of the early waterways and some London Underground lines. Plus ca change.

The real problem for HS2 was in the name: "High Speed 2". OK, HS1, the line into London from the Channel Tunnel, had been a success with trains speeding smoothly into London. Previously passengers sped through the French countryside and the tunnel itself only to trundle slowly into Waterloo, sharing the line with slower traffic. But there is no great advantage in trains running between London, the midlands and the north at very high speed rather than at speed and smoothly, without stops. Rather like Concorde, reducing the flying time part of the journey doesn't necessarily reduce the overall journey time enough to be worthwhile. For me, the main reason to build HS2 was always the additional capacity because of growth in passenger journeys.

Following rail privatisation in 1996 rail travel started to increase for the first time in decades. If you go back to the start of railways, passenger numbers increased sharply from 1840 as the newly created rail network expanded. It reached a peak in the first world war then declined, peaking at a lower level in 1947 before remorselessly declining through the "age of the train" as Jimmy Saville (who Mrs H always knew was a perv) called it on the TV adverts. But then growth resumed in the mid 1990s. It can be argued as to whether or not privatisation was the main reason for the subsequent unexpected upturn, but the end of the not then lamented British Rail was certainly a factor as passenger numbers grew rapidly from exactly that date, passing first the 1947 peak and then the first world war all time peak in rapid succession around a decade ago. It's an interesting graph: 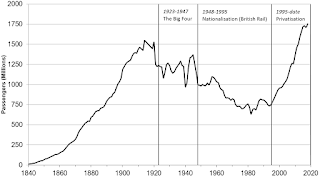 Of course, the size of the network was significantly reduced in the 1960s by the infamous Dr Beeching, though Beeching's cuts were surely necessary at the time to prevent the cost of the railways becoming so unaffordable that the whole network bar the main inter city routes might have been lost. So all those extra passengers were cramming onto a congested system, resulting in over crowding and other problems.

All this was clear by 2009 when the HS2 feasibility study was launched and even more so when the project was sanctioned in 2012. The trend continued: by 2015 the number of rail passenger journeys had doubled since 1997.

So why was very high speed considered so important? I can tell you exactly who is to blame, a chap called Professor Andrew McNaughton. I met McNaughton while I was working in the rail services sector and he was Chief Engineer at Network Rail; it would have been around 2006 or 2007. Even though his reputation preceded him I was surprised at just how full of himself this chap was. He had the greatest sense of certainty that he was right about everything of anyone I came across in my 40 year career in chemicals, nuclear, manufacturing, consultancy and rail. And I met quite a few with that tendency. I realise that comment will make some readers guffaw, as I am very capable of coming across the same way myself, never being short of an opinion. Indeed, sometimes more than one on any subject and often contradictory.... But I can assure you that, in football parlance, I am barely League Two or Conference standard compared with McNaughton who is international class at knowing he's always right.

Soon after that he was made Prof at some Uni or other and I would ask my engineering team colleagues, when they had gone to meetings at which he was present, what pronouncements Professor, Sir, Lord Andrew McNaughton had made. (I called him this so many times in jest I began to think he actually had been knighted. Only a matter of time, Andrew, I'm sure). In 2009 he became Chief Engineer at HS2 and later Technical Director. Since 2017 he has been HS2's part-time Strategic Technical Adviser. At HS2 he was the architect of the gold-plated specification that is now proving so expensive. The trains had to run at 360 km/hr with scope to increase that to 400 km/hr (250 mph in old money), making possible a journey time of 1 hour 7 minutes between London and Manchester.

Why so fast? Here is what McNaughton told MPs in 2012: "We learnt very strongly from people we respect, like Guillame Pepy in France [Pepy was boss of the French state owned rail company SNCF] that they had wished they had not designed to the limit of the day because the technology continues to advance". That tells you everything: HS2 was designed to work with technology not yet available. This is not how large projects are successfully delivered. The Nuclear Installations Inspectorate, not surprisingly, would not licence construction of a nuclear power station which is partly based on technology that doesn't yet exist. If you go on a Trident nuclear submarine, which I did some years ago when the boat concerned was about ten years old, so only a third of the way through its operational life, it is striking that much of the equipment looks like stuff in a museum*. For the obvious reason that it was designed and the equipment ordered the best part of 20 years ago then, more like 35 to 40 years now. That's the point: these projects have very long life cycles and it's pointless to try to catch the wave of the next technological developments as it will all look out of date in one way or another long before the system is middle aged.

The HS2 design concept has huge cost implications. It dictated the route (gentler curves, fewer stations), requires bespoke trains and more resilient tracks. Another Professor, Rod Smith, has said HS2 was "being ruined" as speeds of up to 400km/hr were "completely unnececessary. It knocks the hell out of the track. The dynamic forces at those sort of speeds are incredible." And, as I said above, "it doesn't even save much time". Smith said the UK should learn from Japan's high-speed railway: cutting speed and moving stations out of city centres could help halve HS2's cost. "There's been an abject failure to win hearts and minds about this programme. It's not been explained why this is necessary and a golden opportunity to remodel the country."

I haven't met Rod Smith, who is a Prof at Imperial College and chairs the Future Railway Research Centre, but one of my colleagues in the rail business whose understanding and expertise of the railway was as good as anyone I ever came across always spoke highly of him. If Rod Smith says the H in HS2 is unnecessary then I'm sure my view based more on hunch and prejudice is sound.

HS2 has long prevaricated over what the main rationale for the project is. I went to see the then Transport Secretary, Patrick McLaughlin, talk in Derby (a rail city and near his constituency) in early 2013. He argued that HS2 was needed for the additional capacity it would provide as well as the benefit of higher speed. Indeed HS2 executives have promoted the capacity argument and even considered changing the route's name, but they decided that people would still keep calling it HS2 regardless. Hmm: they might not have done that if the project had been explicitly de-scoped in terms of highest speeds. And folk did eventually stop calling Sellafield Windscale.

I wonder if it's too late for Johnson's review to look at de-scoping the project. A lot of money has been spent and committed but some of the largest companies working on the project think big savings could be made. "We have some frustrations with HS2" one said. "There are savings we know we could make and we could certainly get near or below the budget. They should cut the speed". Wow - "near or below" a budget that might currently get bust by a factor of maybe two.

In 2018 McNaughton was appointed by the government of New South Wales to advise on their plans for a high speed rail network. As the distances are greater there, speed might make some sense. But I'd still say "watch your pockets, chaps". One thing McNaughton will do is give you very confident and assertive advice. Whether it's good advice is another matter.

One thing that isn't quick about HS2 is the delivery. It was originally due to be complete by 2026. I was due to be in my mid 70s by then. There is talk about it being delayed by 5 years. The ability of the UK to deliver projects is such that I currently have no expectation of riding trains on the route.

It's time to cut back on these grandiose requirements which add little and save the project from cancellation. Take the "H" out of HS2 and it might make a lot more sense.

*I'm sure you'll be thrilled to know (no official secret, it's on Wikipedia) that the tactical information and weapons control system on the Trident submarines is essentially based on Microsoft Windows XP. It's called the Submarine Command System Next Generation and, to slightly undermine my argument, it was developed in collaboration with Microsoft during the design and construction phase. But to bolster my argument, there wasn't much doubt about Microsoft's ability to deliver the software and, while Windows XP was cutting edge at the time, Windows is just a wrapper round MS-DOS, already by then well established software.

** The quotations are from "End of the line for HS2?" by John Collingridge in the Sunday Times on 1 September 2019 but the personal recollections and gratuitous opinions are of course mine.
Posted by Phil Holden at 22:36