At about this time two weeks ago tonight in Manchester I saw a 75 year old man lose control of his emotions. And very touching it was too. After a 2 hour, 14 song set and faced with a standing ovation from an audience of over 2,000 people at the Bridgewater Hall,  Roy Harper, despite all his hard bitten experience in some 50 years of gigging, found it hard to speak. From our position in the centre of the front row we could clearly see the tears running down his face.

Harper's an old soldier and he's been in a war over the last 3 years, having been accused in a historical sex case by a sole complainant. The jury threw out most of the allegations but couldn't decide on two. The judge gave the CPS 2 weeks to decide on a retrial but they took 6 months to drop the case. The complainant (I refuse to use the term "victim" in any of these situations unless there is proof the events actually happened) recalled Harper's bald head (it is now but it wasn't then) and his blue penis (!) Harper's partner from the time testified, not surprisingly, that it wasn't blue.

Three years is a long time to lose out of your career at any time, but especially difficult when you are in your 70s. And galling when you've released your first album in 13 years to critical acclaim, leading to the most positive publicity you have received in 40 years, plus a BBC Folk Awards lifetime achievement award, before the court case killed his profile and, potentially, his career and legacy.

Harper sensibly didn't mention or even directly allude to the case, but two songs acquired special meaning.  Hors D'Ouevres, which starts "The judge sits on his great assize..." (er, yes, of course that's a play on words about his backside) is about the way society is all too quick to condemn. It was originally written about music critics but it fitted the circumstances.

And Hangman, written from the perspective of an innocent man about to be hung, fitted even closer. Harper's mood had been light at the start, with quite a bit of laughter (er, maybe a small spliff beforehand? It would have been a large one back in the day). But he sang this song with passion and anger. You can see an amateur video of it here (our seats were much better!)

Harper is clearly not young or strong anymore, but he still sings and plays convincingly. 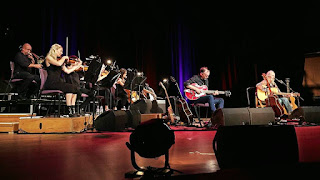 Backed by an eight piece mini-orchestra and a supplementary guitarist, the set was accomplished and included songs released from 1969 to 2013. I particularly liked the double bass player ditching her bow and giving it some skiffle style slap on "Don't You Grieve", Harper's intriguing (or blasphemous, depending on your viewpoint) take on "the gospel according to St Judas". (Harper has no time for religion in any form). You can see an amateur clip here. (Scroll down to Dave Whittaker's post on 14 September at 21:03). Here is Beth on the double bass (Roy on the right, Bill Shanley the left): 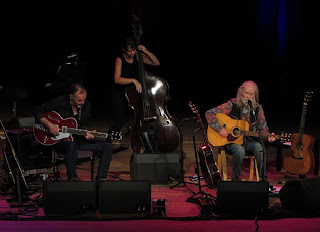 Harper eventually managed to say "I'll try to see you again" (I'll See You Again being another song in the set) before waving and looking back as he left the stage. I've seen him play at least 10 times - all good gigs - and humble isn't a word you'd use about him, but humbled is how he seemed looking at us all standing there giving it large. And speechless, which I've certainly never seen previously.

Before the court case Harper had mused that he might have 3 or 4 albums left in him. Only time can tell where we're going to, but maybe now he'll still get to make at least one of them.

Or even, as he suggested in response to a shout out, bring the 1969 song McGoohan's Blues out on tour : an 18 minute long piece from the album Folkejokeopus - that would be worth seeing.

Either way, Roy, the memories are dear and you've always made us think. 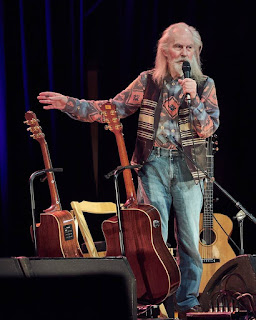 Thanks a lot Roy, man.

Footnote: Of course there are several barely concealed references to Roy's songs above.

There are at least 4 others but I'll leave experts out there to spot them.

For a review of Roy's gig a few day's later at the Royal Festival Hall, by Opher Goodwin (author of 45 books) see here. "We feared we might have lost him for good. But we haven’t. Roy is still there delivering something unique and exceptional. Nobody does it better. Nobody has produced songs of such beauty and magnitude. This man is England’s finest! It is about time he is recognised as our foremost Singer-Songwriter – up there with the likes of Dylan and Cohen."